Washington, DC - The American Council of Engineering Companies (ACEC)—the business association of the nation’s engineering industry—is pleased to announce that Daniel Larson, P.E., has been nominated to serve as a 2022-2024 Vice-Chair of the Board of Directors

"I’m pleased that Dan Larson has been nominated to serve as a Vice-Chair," said ACEC Chair Robin Greenleaf. “Dan is a proven leader with distinguished service in several of the Council’s most important organizations. His experience will benefit the Council as we work to expand our voice in Washington and beyond.”

Larson is the CEO of American Engineering Testing, Inc (AET), headquartered in St. Paul, Minnesota. AET is a 100% employee-owned, multi-disciplined engineering firm serving clients nationwide and around the world from 18 offices in the Midwest and West. He holds a Bachelor of Science degree in Civil Engineering from the University of Minnesota and is a licensed professional engineer in Minnesota, Wisconsin, Idaho, and Florida.

Larson began his career as a design structural engineer and later focused his practice on forensic structural engineering, specifically building assessment, repair, and restoration. He joined AET in 1990 as department manager; was promoted in 1994 to Division Vice President; and was elected in 1998 to the firm’s Board of Directors. He was named AET’s Chief Operating Officer in 2009, President in 2010, and CEO in 2016.

He is a Past President, National Director, and PAC Champion of ACEC-Minnesota. He is a member of ACEC’s Risk Management Committee, and his firm is a founding member of the Geoprofessional Coalition.
Larson is passionate about developing our next generation of leaders and building healthy organizations. He helped form the ACEC-MN Workforce Development and Risk Management Committees and has been a mentor and coach to many aspiring professionals inside and outside of his firm. 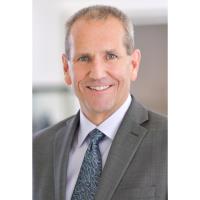