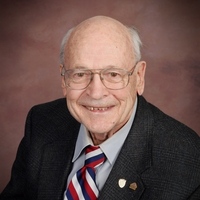 Robert was born on August 27, 1924, in Callaway, Nebraska where his father was the superintendent of schools.  The family moved to Lincoln when his dad became the director of teacher certification for the state of Nebraska.  Bob attended junior and senior high school there graduating from Northeast High School in 1942.

Bob joined the Boy Scouts in Lincoln where he went on several canoe trips in the late 1930s and early 1940s with his dad and their scout troop to the Boundary Waters, long before it officially became the BWCA.  He earned the rank of Eagle Scout and continued serving the Boy Scouts as a scoutmaster, district commissioner, and numerous other positions.  Bob also designed several scout camps and facilities for the Indianhead Council.  His children, especially his favorite daughters, often irreverent, affectionately called him “Boy Scout Bob”.

Bob attended the University of Nebraska for one year and then transferred to the U of M to join the Naval Reserve.  Bob joined the Navy’s V-12 program at the U of M earning a bachelor’s degree in Civil Engineering in 1945.  He was commissioned an ensign and sent to Okinawa with the Seabees for the reconstruction of the island.  Following his service after WW-II, he joined the merchant marine for a year to see the world.

Bob returned to the U of M and earned his master’s degree in Civil Engineering in 1948.  He continued in the US Naval Reserve and returned to active duty for 2 years during the Korean War.  He served in the USNR for 25 years before retiring as a Commander in the Civil Engineer Corps.  He was very proud to be a Seabee, attended numerous Seabee reunions and went to see the Seabee, WW-II and Korean War memorials in Washington, DC.

Bob met Joyce through Toastmasters/Toastmistress Club at the U of M in 1947.  He graduated in 1948 with a master’s degree in civil engineering.  Bob and Joyce were married in September 1949 and remained married for over 69 years. They were supportive of each other as parents of their four children, and in their respective careers and commitments to a variety of organizations.

Bob began his work career with a construction company in Dubuque, IA, and when recalled to active duty, the family moved to Key West, FL and then to Athens, GA. After being released from active duty, the family moved to Belmond, IA where he worked for a small civil engineering firm.  It was in Belmond where he designed his first of many swimming pools.  In 1959 they returned to Minnesota and settled into family life, raising four children together in Roseville.

They were active and had many dear friends at Centennial United Methodist Church from 1959 until their deaths.  They served together as confirmation class teachers and Bob was also on several building committees as the church grew.

In 1959 Bob joined the civil engineering company with Otto Bonestroo and Joe Anderlik to form what was to become Bonestroo, Rosene, Anderlik and Associates.  The firm worked as consulting engineers for many of the cities and suburbs around Minneapolis and St. Paul, ultimately growing to over 350 employees and serving three states.  He retired from BRA in 1992.  He remained active and held his Professional Engineer registration until 2018.  He was very supportive of the U of M’s Department of Civil, Environmental, and Geo-Engineering and a proud U of M Gopher.

Bob was a member of the Roseville Rotary Club for many years. He and Joyce hosted numerous Rotary guests from around the world in their home.  They also attended several Rotary International conventions, including Chicago, San Antonio, Singapore, and Barcelona, Spain.

Bob holds an especially loving place in the hearts of his grandchildren and great-grandchildren. Grandpa Bob encouraged and supported them to follow their dreams and ambitions to make this world a better place. 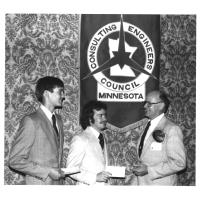