Norman Clarence Wenck was born on May 9, 1940 to Clarence and Edna in Carroll, Iowa. He studied Civil Engineering at Iowa State University, where he achieved both his Bachelor’s and Master’s Degrees. This is also where he met and married the love of his life Mollie (Feit).

After graduation, Norm was commissioned as a 2nd lieutenant in the United States Navy. He served in Maryland, Thailand and Minnesota. After his Naval service, he worked as a professional engineer and eventually founded his own company Wenck Associates, Inc. in 1985.

Norm loved Jesus. He and Mollie were long time members of Vision of Glory Church and built many lifelong friendships while there. He also enjoyed Bible Study Fellowship for decades. He married Mollie in December of 1962 and spent nearly 60 years with her in a loving marriage. They loved to spend time together traveling and enjoyed boating on Lake Sarah, relaxing on the North Shore of Lake Superior and wintertime visits to Colorado, Hawaii and Florida. They were blessed with a large family including 4 children, 13 grandchildren and 1 great-grandchild. Norm loved spending time with his grandchildren and traveled the globe on adventures with many of them.

Norm lived with generosity. He was a faithful giver to his church and supported many charities and organizations. He was also generous with his time as a mentor, business coach, and friend to so many. He especially loved his Boundary Waters canoe trips with his small band of adventurers.

Norm had a passion to serve others. Most recently, he was the Chairman of the Board for Presbyterian Homes & Services. He also served with Engineering Ministries International, traveling to Afghanistan in 2002 and North Korea in 2008. Norman also was a member of The Christian Network Team and The Executive Committee. Norm was a past ACEC Minnesota Member and founder of Wenck Associates.
.
Norm was 82 when he passed away at his home on May 25 as a result of a tragic accident. Norm will be remembered by his dear wife, Mollie; daughters, Lori Cerar (Tom) and Lisette Torve (Kent); sons, Todd (Christine) and Joshua (Dawn); grandchildren, Jordyn Heide (Donavan), LilyAna, Maliya, and Tyler Cerar, Emily Balts (Jason), Madeline, Abigail, Mason, and Isabelle Torve, Micah Wenck (Emily), Caleb, Josiah, and Noah Wenck;  great-grandson, Ezra Wenck; his brother, David Wenck (Joyce) and sister, Nancy Warnke (Ron).  He was preceded in death by his parents, Clarence and Edna Wenck and his in-laws, Alan and Gladys Feit.

Reviewal will be held at Gearty-Delmore  on Thursday, June 2 from 6-8pm. A service to celebrate Norm’s life will be held Friday, June 3 at Vision of Glory Lutheran Church in Plymouth at 12 pm, reviewal one hour prior.

The service on Friday will be livestream on the Vision of Glory facebook page.   https://www.facebook.com/visionofglorychurch/videos/?ref=page_internal 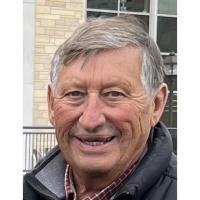