Alm has extensive experience in organizational leadership and construction and design management for projects, including for the federal sector. Prior to joining Hanson, he was a vice president and regional business leader for an international design and consulting services engineering firm, working at the Minneapolis office. He started his career with the U.S. Navy Civil Engineer Corps, working for the Navy Public Works Center in San Francisco; serving in Naval Mobile Construction Battalion 3, including deployments to Guam and Sicily; serving with the U.S. Army’s 36th Engineer Group (Construction) at Fort Benning; and working with the resident officer-in-charge of construction for the U.S. Naval Academy.

Alm received a bachelor’s degree in engineering from the U.S. Naval Academy and a master’s degree in civil engineering from the University of Washington. He is a licensed professional engineer in several states, including Illinois, and a Leadership in Energy and Environmental Design accredited professional. He is a member of the Society of American Military Engineers (SAME), and he received the Regional Vice President’s Medal from SAME’s Minneapolis-St. Paul Post in 2011. In 2000, he was named the Naval Facilities Engineering Systems Command (NAVFAC) Federal Engineer of the Year.

Freitag, who joined Hanson in 1990 to manage the firm’s marketing communications, became a vice president in 2005 and a senior vice president and the federal services principal in 2009. She helped establish the firm in serving federal clients, including NAVFAC, the U.S. Army Corps of Engineers, the National Guard Bureau (Army and Air National Guard), the Federal Emergency Management Agency and the U.S. Air Force.

Hanson is a national, employee-owned consulting firm providing engineering, planning and allied services. The firm’s corporate headquarters is located at 1525 S. Sixth St., Springfield, IL 62703. The office may be reached by phone at (217) 788-2450. 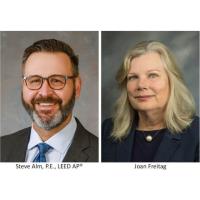